RR GPRS suspension request is not forwarded to the GMM/SGSN

Added by lynxis almost 4 years ago. Updated almost 2 years ago.

using a sysmobts:
- a MS can send a GPRS suspension request to the network to notify it is unavailable for some time
(e.g. if sending/receiving a SMS).

This request isn't yet forwarded to the SGSN. 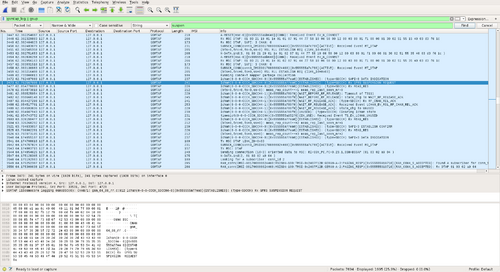 As specified in 3GPP TS 03.60 Section 16.2.1 and 44.018 Section 3.4.15,
a Class B MS is sending a "RR GPRS SUSPEND REQ" via a DCCH to the BTS if
it wants to suspend GPRS services. The BSS is now responsible to
somehow forward this to the SGSN. As the Gs interface between BSC and
SGSN is both optional and doesn't have any provision to forward this
message, we have to send it over to the PCU so it can use regular BSSGP
signaling to inform the SGSN of the SUSPEND REQUEST.

The existing code ssumed that the RR SUSPEND REQ would be a
LAPDm/RSL unitdata request. I couldn't find any spec reference
that would support this. Rather, the message is sent via the normal
main dedicated channel, which is operated in ABM mode.

As the somewhat similar check for diverting measurement results
is in fact looking for UNITDATA, we have to untangle this slightly.

#1 Updated by laforge over 3 years ago

well, this is not really a bug.

GPRS has multiple "Network Mode of Operation", NMO I, NMO II and NMO III. As we don't have an (optional!) Gs interface between SGSN and VLR, there is no coordination between the Cs and Ps domain. We also don't support DTM (Dual Transfer Mode).

As such, it is surprising to me why a MS will send a "GPRS SUSPEND" over the DCCH to the CS side of the network at all.

Unfortunately, TS 03.60 Chapter 16.2.1 is rather unclear about the suspend/resume details.

this doesn't specify over which logical channel (PDTCH or DCCH) this is sent to "the BSS" at all.

is equally vague, as the Cs-side of the BSS (BTS, BSC) have no connection to the SGSN at all. Only the PCU does, and the PCU has no relation to DCCH on the Cs side.

So I suspect that we somehow
a) we are sending something wrong in our SI that makes MSs believe that we support some kind of NMO-I or DTM related functionality, or
b) some MS send GPRS SUSPEND over DCCH even though the network nowhere indicated such functionality

#2 Updated by laforge over 3 years ago

The optional Gs interface between BSC and SGSN does not support any signalling of GPRS SUSPEND.

So I think in order to support this, we indeed would need to filter such messages inside OsmoBTS, and pass them over the PCU socket into OsmoPCU. Inside the PCU, we then can forward them via BSSGP as if we had received a suspend request over the P*TCH.

#3 Updated by laforge over 3 years ago

#4 Updated by laforge over 3 years ago

The inverse operation (GPRS Resume via the GPRS Resumption IE of the RR CHANNEL RELEASE) is entirely optional, so we should get away with not implementing it.

#5 Updated by laforge about 3 years ago

#6 Updated by laforge over 2 years ago

#7 Updated by osmith almost 2 years ago

I have rebased the osmo-bts branch and force-pushed it. But the osmo-pcu branch does not exist anymore, can you push it again laforge? (It doesn't seem to be merged, at least osmo-pcu.git does not mention this issue in "git log".)

#8 Updated by laforge almost 2 years ago

[OsmoBSC - Bug #2249] RR GPRS suspension request is not forwarded to the GMM/SGSN
https://osmocom.org/issues/2249

I have rebased the osmo-bts branch and force-pushed it. But the osmo-pcu branch does not exist anymore, can you push it again laforge? (It doesn't seem to be merged, at least osmo-pcu.git does not mention this issue in "git log".)

Erm, the branch very well still exists on the server. I just wanted to push (a probably rebased version)

#9 Updated by osmith almost 2 years ago

#10 Updated by osmith almost 2 years ago

I've compiled latest master for sysmoBTS 1002 and tested sending SMS with a smartphone, with and without the patches and searched for the GPRS suspension message in the wireshark gsmtap_log. And I can confirm that the patches work! See attached wireshark screenshot.

Besides rebasing, the only changes I've made are fixing a missing include and a typo (osmo-bts.git):

#11 Updated by laforge almost 2 years ago

patches have been merged. For the BTS side, there's now a patch in PCU_Tests_RAW.ttcn, see https://gerrit.osmocom.org/#/c/osmo-ttcn3-hacks/+/13383/

#12 Updated by laforge almost 2 years ago

It also seems that the BTS implementation was broken: It forwarded RR SUSP REQ which were sent as unacknowledgd UNITDATA, but not those over regular acknowledged mode. AFAIK, the spc implicitly requires the use of acknowledged mode - like for everything else unless it explicitly states unacknowledged mode (measurement report, VGC/VBCS related stuff). Fix see https://gerrit.osmocom.org/#/c/osmo-bts/+/14193

#13 Updated by laforge 9 months ago

#14 Updated by pespin 5 months ago