Added by foxrf about 1 month ago. Updated 1 day ago.

It appears that the MNCC socket has been replaced with OSMOCC which does not appear to have ANY documentation around how you are actually supposed to configure call routing with this thing. More specially the osmo-cc-router package attempts to call a bash script "routing.sh" for which there is no sample or documentation going over the syntax. Please add full documentation on how this bash script is supposed to route calls and or provide a detailed example script. 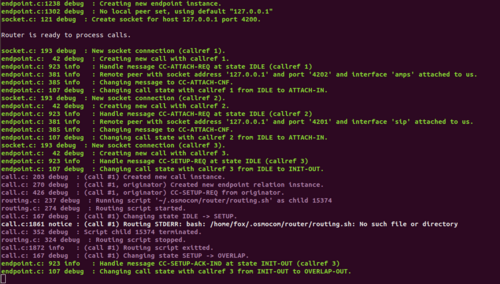 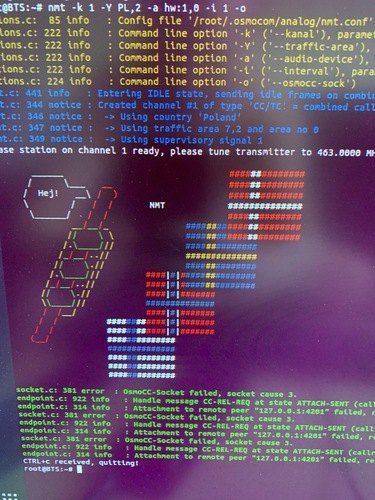 #1 Updated by laforge about 1 month ago

#2 Updated by laforge about 1 month ago

I've assigned this to jolly, as he's really the only one (AFAICT) working on osmocom-analog.

As for OsmoCC, there had been an early "concept paper" that jolly shared among the Osmocom developers, but I'm not sure how accurate it still is, and whether he intended it to be publicly distributed.

Hey, did you managed to do anyprogress? What OSMO-CC should connect to ?

I am stuck at socket failed ;-(

I am stuck at socket failed ;-(

It looks like the routing script needs to echo commands based on the calling number/called number on what to do on what call. Taking a look at call.c under the routing_receive_stdout() function seems to show a list of possible commands. I was able to get it to respond to my calls with the "call cannot be completed as dialed" response by placing the following in the routing.sh script:

Then set the permissions on the routing script to 775. I'll have to play with some of the endpoint software to see if it gets me any further. It looks like more complex scripts could be built by comparing the arguments osmo-cc-router sends the scripts, it looks like it sends the caller/called number as arguments.

So after fiddling around with the software a bit more, I managed to get a call going through SIP, you have to compile osmo-cc-sip-endpoint, osmo-cc-router isn't actually needed at all. I set up an Asterisk server, but any SIP server should work. I made an account for the cell phone using it's phone number as the extension.

One thing I did notice was that if you tried to make a call from a sip client to your analog phone, something along the way drops the phone number you want to ring. Here's the command I ran to get the sip endpoint working:

The screen-called-in replaces the weird null phone number into the actual phone you want to ring.

Hope this helps out a bit!