Added by laforge 5 months ago. Updated 13 days ago.

So.. As part of the Community_TDMSS7_Network, offering PRI is nice but most people will have BRI equipment (modems, ISDN-TA, small home PBX, ...) that they'd be interested in attaching.

Doing this with COTS ISDN adapters is not an option, as we cannot control their clock to match the master clock of the TDMoIP network.

I've been brainstorming a potential design and validated component availability. Currently I'm thinking of something like this

The more interesting question is the interface on the "Compute" side.

The major problem right now is availability of uC or FPGA.

One thought might be to use an SAME5x (sysmocom uses that part in the sysmoOCTSIM and has some stock. It is a bit on the high-end side compared to the requirements). 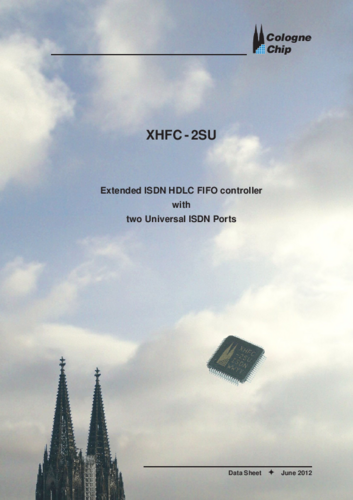 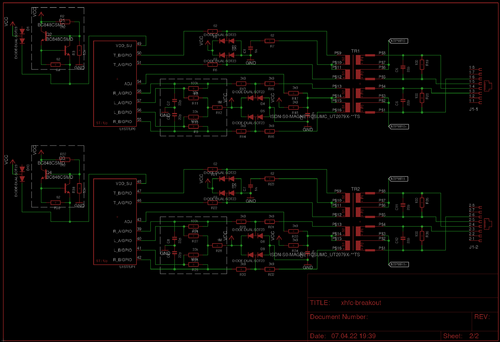 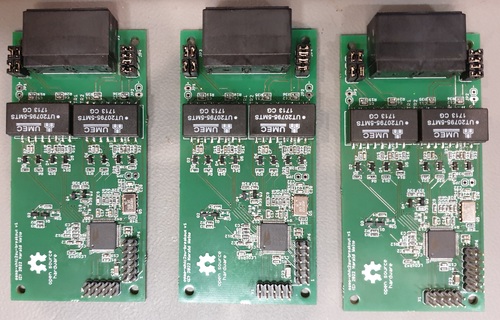 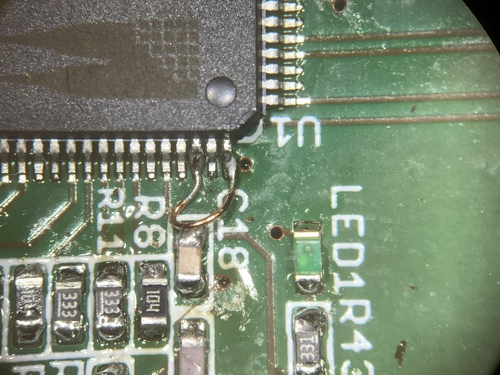 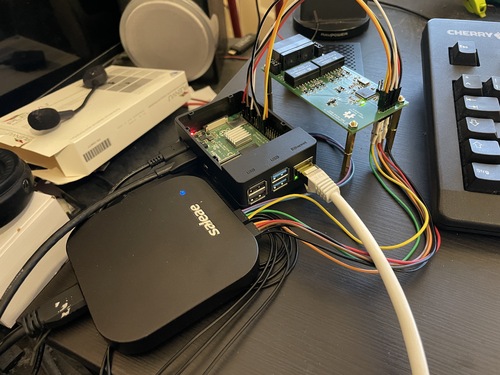 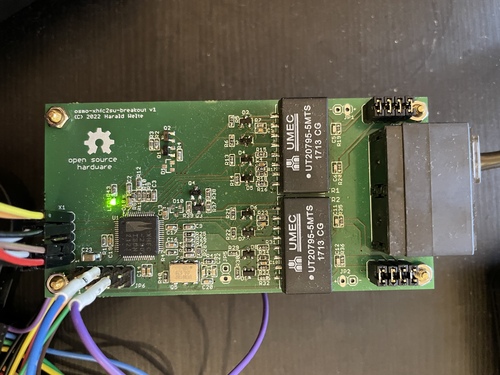 Updated by tnt 5 months ago

Quick note is that for a standalone solution, if this has to work through the internet with auth/encryption and all the complexity of networking (config dhcp/manual/ipv6) ... it'll take a beefy uC.

Quick note is that for a standalone solution, if this has to work through the internet with auth/encryption and all the complexity of networking (config dhcp/manual/ipv6) ... it'll take a beefy uC.

Encryption is probably asking for too much in such a small/embedded device.

Given our existing experience with NuttX at sysmocom some years back I would consider using
NuttX as a OS, and NuttX has IPv4, DHCP and IPv6 support (although the latter may not be
entirely production-ready, I never tested it).

So if we go with this series, we can realistically either go for 64pin (no USB) or 144pin (with USB).

Ok, decided to take the risk and order some SAMV71N19B in 100-TQFP which should arrive in late February 2022. As they have both Ethernet and HS-USB, we keep all our options. Flash is "only" 512k, I would have preferred 1M or 2M - but that would have meant using 64pin packages without working USB.

I did a quick Nuttx build for the V71 with lots of additional features, debugging, shell, telnet server, USB, CDC-ACM, Ethernet, IPv4, IPv6, mbedTLS, DHCP client, ... and it ended up a 260 kByte. So even with a DFU loader we should still have some space for the application.

So we can do away with the ATtiny doing frequecy division, one less part.

We'll have to work out how the 'disciplining' of the VC[TC]XO is going to look like, preferably without requiring additional parts beyond what the SAMV71 has to offer, which is plenty, in theory:

The 16-bit TCs can be chained, see Figure 50-2 of the SAM E70/S70/V70/V71 manual. So we can basically create one 32bit counter, which is far sufficient count a few megaherz of clock cycles between two 1PPS signals, if we configure the PPS to do the 'trigger'. Software should then be able to steer the XO voltage via some control loop.

one interesting topic is the question of providing phantom voltage to attached end user devices like phones.

The specs require a voltage between 34..42V.

One could of course go the "usual" way of using a dc/dc upconverter to generate that voltage. The problem is that most DC/DC converter modules are very hard to source these days (and expensive, of course).

So an alternative approach could be to use an 48V power supply, and then use a DC/DC to 3.3V for the digital side, and use a linear regulator for generating 34..42V from the 48V. This would also open the possibility fo doing a PoE input. This way it would be a PoE-powred Ethernet-to-BRI converter, actually pretty neat.

In the end, I think the PoE PD and phantom voltage supply could be a separate, optional daughter board, given the involved cost.

I'm currently focusing on the PRI side, so don't expect too much progress here.

As a first step, I am planning to build an "XHFC-2SU breakout board", with connectors that allow it to be hooked up to an ATSAMV71-XULT evaluation board. This first board will contain the XHFC-2SU, the magnetics, matching networks, and the VCTCXO. It will not contain any power supply / phantom voltage or the SAMV71 yet to keep things simple. Having that board would allow somebody to already work on the software, which is also a non-trivial undertaking.

so it is sufficient to provide the 8kHz clock.

There's an open source mISDN driver for the XHFC-SU at https://github.com/ISDN4Linux/mISDN/blob/master/drivers/isdn/hardware/mISDN/xhfc_su.c which can be used as inspiration when writing the firmware.

I did the initial footprints for magnetics + XHFC, as well as the schematics work for the line interface from XHFC chip through all the passives, magnetics and to the RJ45 sockets, see https://gitea.osmocom.org/electronics/osmo-small-hardware/src/branch/laforge/xhfc/xhfc-breakout

Updated by laforge 2 months ago

The XHFC-2SU breakout board has beem making good progress. The board contains

It's a 100x50mm 2-layer PCB. No parts smaller 0603 were used to facilitate convenient hand-soldering.

I'm going to add some more test pads, a power LED, an LDO and some minor bits and will order some first prototype PCBs from aisler later today.

Updated by laforge 2 months ago

ok, xhfc-breakout v1 has been completed. pushed to master of osmo-small-hardware.git and ordered 3 prototype PCB (matches the 3x XHFC-2SU samples I have).

parts have all arrived, I started assembly of the first prototypes but then got pre-empted by important work :/

3 Prototypes have been assembled:

The assembled prototypes differ from the schematic in one way: R5/R6/R21/R22 are 0R but should be 3R3 (as the "universal NT/TE mode" assembly option is chosen).

Boards will be sent to manawyrm and tmwawpl while I'll be on holiday. Let's hope they can get them to work and I didn't make too many errors in the design or assembly.

First signs of life:
The ALE/SPI_INV pin was created in the EDA, it's connected to a net, but that net doesn't go anywhere.
That pin is quite important and need to be grounded, though. After grounding, the chip can be talked to! :) 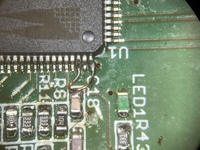 Sorry for that ALE pin bug, and thanks for finding it.

Had some expert kernel dev help from tSYS to get this working, mISDN was using some spinlocks in places and wasn't really compatible with talking via SPI, but that was pretty easily fixable.
Now back to DAHDI...

The attached photo shows the jumper configuration for NT-mode, connected to a phone with a 1:1 cable.

Updated by tmwawpl about 1 month ago

I've updated my board to fix the ALE/SPI_INV issue as instructed by manawyrm. Then connected XHFC board to PC using SPI provided by Bus Pirate. There is communication with HFC chip so board works.
Also NuttX is now running on my STM32F4Discovery board, basic networking works (ping, dhcp client).
TODO:
- communicate over SPI with XHFC chip using NuttX

Updated by laforge 25 days ago

First signs of life:
The ALE/SPI_INV pin was created in the EDA, it's connected to a net, but that net doesn't go anywhere.
That pin is quite important and need to be grounded, though. After grounding, the chip can be talked to! :)

Updated by laforge 13 days ago

manawyrm would you mind explaining a bit further the software setup you managed to create?

Updated by manawyrm 13 days ago

laforge Sure!
Currently, the XHFC-breakout is working with mISDN on a Raspberry Pi.
This patch (applies to a current raspberrypi master-branch Linux kernel) will add support for the xhfc-breakout device (will get automatically detected from the device tree).
I wrote a device-tree overlay which will get the kernel to load the appropriate mISDN driver automatically.
The patch is pretty ugly, but I attached it anyways :)

I was using misdn's testlayer3 utility for most of my testing so far.
My main target was to get the hardware up and running (up to a phonecall), so I could verify the board, layout and chip itself as working :)

The next step (at least for me) would be to write a DAHDI driver.

I've started to try and port the functionality of the one DAHDI driver that already used a XHFC device (wctdm24xxp), but that was a bad idea. The code structure/layout of that driver is way to complex and messy, as it's designed to accept daughter cards for various connection methods.
So the best way forward is probably to write a clean DAHDI driver.

That could interface with Yate and probably osmo-trunkdev/osmo-e1d to make something that could be used to connect to OCTOI already :)
I was busy with the dayjob in the past couple of weeks (we're getting ready for a big launch) and thus haven't had much time (and piece of mind) to sit down and try to write something like that.

Before going any further with the embedded system, there would probably need to be some way of transporting BRI data over the OCTOI protocol? Not sure where you'd start with that. I don't think it's really helpful to port something like mISDN to an embedded platform, just to rip it all out again and replace it with the UDP interfacing code?

Updated by laforge 6 days ago