The Pirelli DP-L10 is a tripleband GSM/Wifi VoIP dualmode phone, which was developed by Pirelli Broadband Solutions and manufactured by Foxconn. 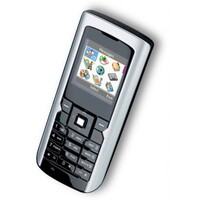 It was branded and sold by quite a few operators:

The phones are still available as new at various places like eBay, Pollin or rebelsimcard.com.
For more information on the original firmware see the ip-phone-forum wiki (german).

There are no schematics of this phone, however, steve-m has grinded down one of those boards, see the pictures of all layers here or locally at PirelliDPL10PCB.

Since this phone is a tripleband design, it uses 3 rx filters, connected to the respective Rita inputs:

Those are connected to an unknown "T 636 / 5475" antenna switch. The pinout of this switch however is identical with the Panasonic EZFL897TB11C.
The control voltage inputs of the switch are connected to the TSPACT outputs of the Calypso DBB through a Fairchild NC7NZ34 triple-buffer. 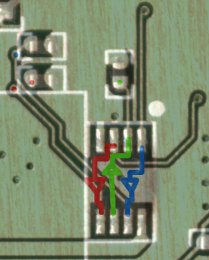 The idea to use an OsmocomBB-driven phone as an accurate clock source, e.g. for the USRP, by synchronizing the clock to a cell of a commercial operator was discussed on the mailing list a while back. Since the USRP needs an input clock of 52MHz, but the Compal-phones only expose 13 and 26MHz, an external PLL would be required. The DP-L10 however exposes the MCLK/TSPACT11 pin of the Calypso, which is connected through the triple-buffer to the GSM900 TX/Vc3 input of the antenna switch, and thus easily accessible. When the corresponding bit in the MCU_SW_TRACE register is set, this pin outputs the 52MHz clock being fed to the ARM-core, which is phase-locked to the VCTCXO. See the blue circuit path in the picture above.

This is the output captured with a 100MHz scope (and thus limited): 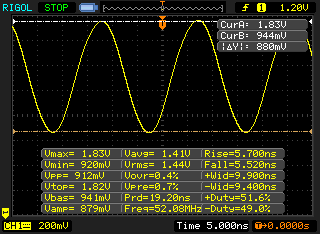 After synchronizing to a cell with the phone, the frequency error measured by the DSP is in the 0-10Hz range.

A nice feature of this phone is that it already has an integrated Silabs CP210x USB-UART, which is supported by Linux. Even faster, odd baudrates of the Calypso DBB are supported by this chip, including the maximum 812.500 baud.
Most of the phones seem to use USB vid:pid 0489:e003, which is mainline since Linux 2.6.36 ().

All JTAG lines, as well as the second uart (UART_MODEM), go to the unpopulated connector next to the display connector. 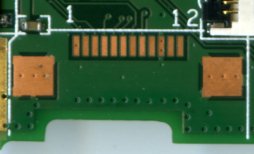 The code which adds support for the Pirelli DP-L10 can be found in master.

Note: As the power button is not connected to the keyboard scan matrix and can only be read through a Iota status register, which is quite impractical, we use the camera button on the top left side of the phone as a substitute.

Due to the fact that the phone has a USB charging mode, loading osmocomBB is a bit more complicated:

Without removing the battery the following procedure is possible (without SIM, but it takes longer):

When osmocom is alreday running on the phone and you want to reboot/load an updated version/different application, do the following:

Updated by laforge about 1 year ago · 24 revisions