This is the standard Ti Calypso-based modem design used in many phones, including the Compal-built Motorola C1xx phones and
also the Openmoko GTA01 (Neo1973) and GTA02 (FreeRunner) and possibly a number of other older FIC GSM products.

It is a typically a dual- or tri-band GSM modem design with or without support for GPRS.

The block layout of this modem looks like this:

This is only a simplified version, ignoring the time constraints, sequencing of power-on/off events, AFC, AGC and APC. 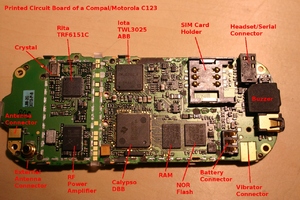