OSmux is a multiplex protocol that proxies voice (RTP-AMR) and signalling traffic in order to reduce the bandwidth consumption, which can be specially important in satellite based GSM back-haul systems. Development of the protocol has been so far mainly accomplished by sysmocom GmbH and funded by On-Waves ehf.

The latest version of the reference specification can be found in the nightly build of osmo-gsm-manuals: osmux-reference.pdf

So far, main use of OSmux has been connecting several OsmoBSC with a bsc_nat through a satellite link to multiplex and batch calls together. Both use the implementation in libosmo-netif to gain OSmux support. Use of OSmux protocol in those projects can be configured using the VTY configuration interface.

The packet dissector can be found in packet-gsm_osmux.c

Support for Osmux was later improved during May-June 2017. Some of the new features include:

First, load a pcap file or start recording on an interface with an OSmux connection ongoing.

If the Osmux connection is not detected and it only shows up as a regular UDP flow, then select any of the UDP packet flows and right click to open the menu, then select "Decode As...". A window with a list of protocol will show up. Select "GSM Osmux" and press "Apply". At this point, the dissector should be displaying all OSmux information for packets on that UDP flow. See screenshot section below to have an idea how it should look like.

On the info column, for each UDP packet you should see a summary of what does that packet contain from OSmux point of view. It will show the OSmux frame type. If there is more than one OSmux frame per packet, then all will be shown separated by commas.

Packets displayed as "Old Dummy" are specifically crafted packets from early specs/implementation days of Osmux. Support to dissect them is left for backward compatibility and to be able to dissect correctly old pcap traces. They can be identified because its Osmux frame length is 2 bytes containing only the control byte (1st byte) and the CID (2nd byte). In this kind of packets, the control bytes has the value 0x23

You can select any packet and you will see all the bits decoded in the packet tree.

Every OSmux frame will contain an "Osmux Stream ID". That's a value calculated by Wireshark which identifies uniquely every tuple [ip-src, port-src, ip-dst, port-dst, cid], which means for each call between A<->B, you will have 2 streams, one for each flow direction. You can right click on the "Osmux Stream ID" field on the packet tree and use it as a filter ("Apply As Filter"->"Selected") to filter and list packets for a specific stream.

Limitation: If you record for long enough or the same tuple (IPs, ports and CID) is reused fast enough to set up a new call, the code in the Osmux dissector won't be able to differentiate between the old call and the new call, and thus both will be assigned the same "Osmux Stream ID", which is bad specifically if you want to calculate the statistics using the stats tree, as then the calculated values will probably be wrong. The advise here is to manually review and make sure this doesn't happen, by knowing context of the trace or following some heuristics like "this stream didn't receive packets for a long time and after that packets start flowing again, probably starting with a few Dummy packets". If it's the case, identify manually the different streams and split them into a different capture to have good results from the OSmux tree.

The stats tree is a built-in graphical interface from Wireshark to display a few variables and counters over a set of packets.

OSmux uses this interface to display some statistics for each stream ID identified. To open the stats tree GUI for OSMux streams, use the following menu: "Telephony->Osmux->Packet Counter". A new small window will appear which let's you apply a filter to calculate statistics for only a subset of the packets already detected as OSmux by the dissector. For instance, if you want to calculate statistics only for a certain stream with ID 123, you can pass osmux.stream_id 123", then press "Create Stat".

The stats tree GUI will appear, listing the streams according to the applied filter. See screenshot section below to have an idea how it should look like. Each stream is shown in the following format:

On the Count column you will find the number of packets which are part of that stream. For each stream, the following fields are displayed:

Fields which have no packets matching are not shown and their values can be usually understood to be zero or similar logical value. 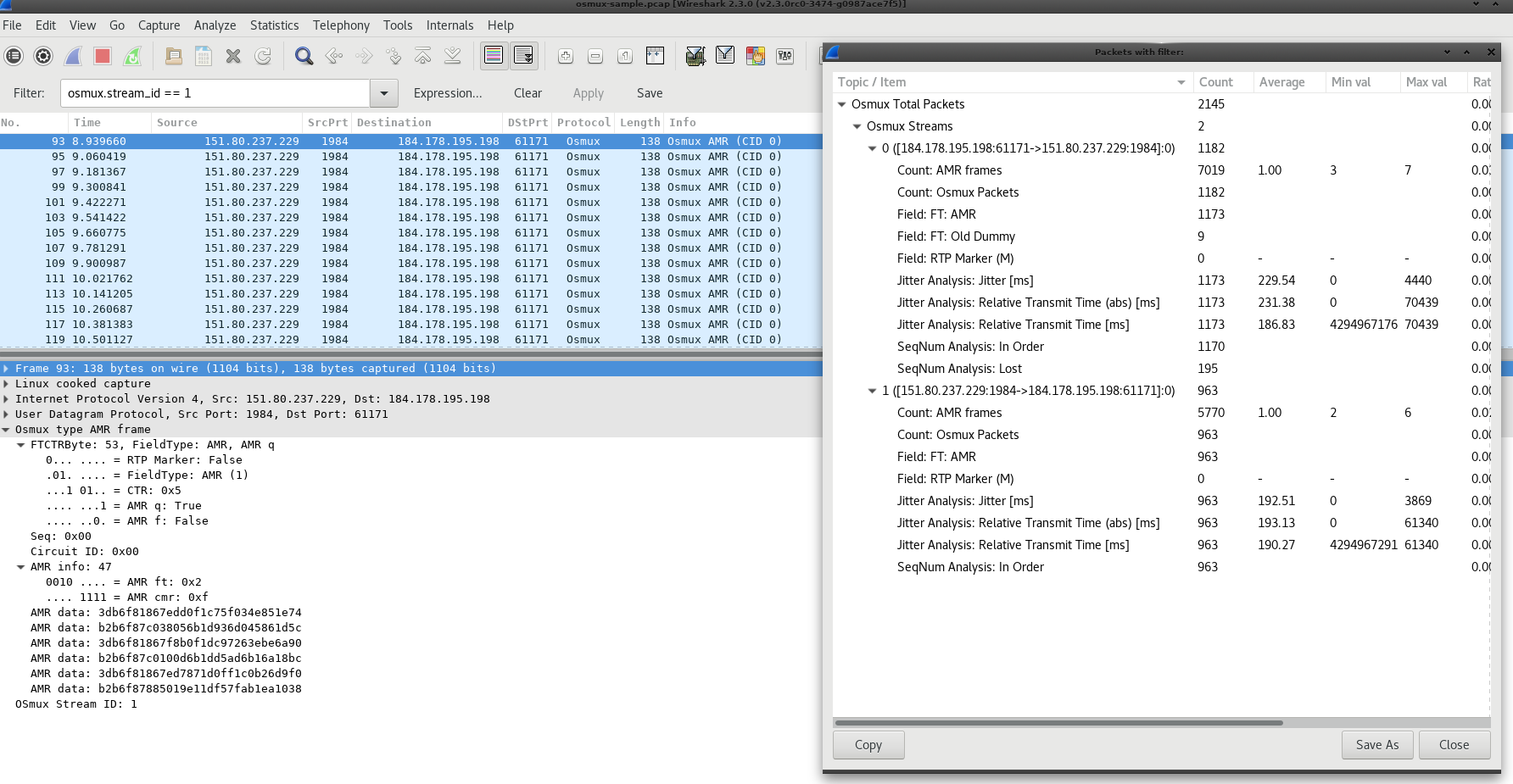