The RUS is a multi-standard Radio Unit in the RBS6xxx family. Depending on the associated Digital Unit (baseband), it can provide GSM, WCDMA or LTE carriers. It offers 20 MHz of RF bandwidth and has a wideband multi-channel power amplifier (MCPA).

If used for GSM (such as driven by a DUG 20), it can operate 4 soft-TRX inside one RUS.

The RUS has a band-width of 20MHz, and there can be multiple "sofware defined" RF carriers within that band-width. In case of GSM, it can have four TRX/carriers in that band.

The standard RUS unit permits a TX power of 20W. However, using software licenses, the power can be increased to 40W or even 60W.

The RUS has two CPRI links, each with their own proprietary connector. They don't have a SFP slot, as interconnection with the DUL/DUW/DUG20 is happening over short (less than 0.5m) copper patch cables. However, as the DU side is a SFP form-factor, the signals are assumed to be identical, just on a different mechanical connector. 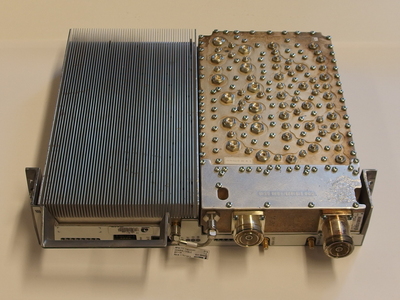 Measurements were taken using a RUS 01 B8.

Measurements were taken using a RUS 02 B8.

Updated by laforge over 2 years ago · 15 revisions